The recently published Vers(z)iók [Vers(e)ions] anthology brings to mind an anthology series that is continually being published, Doc(k)s, and the person who deals with these publications: Julien Blaine.

We first heard of Julien Blaine in 1979 during our Italian trip, from his great friend and fellow poet Adriano Spatola, who, like Blaine, lives in a windmill… 41-year old Julien Blaine is a well-known figure in the French “world of poetry”, not only because of his visual, concrete and phonic works of art but also because of his activities as an organiser and publisher. Since 1962 he has taken part in the running of a number of experimental poetry publications. In 1962 he participated as an editor for the “Les Carnets de l’Octéor”, then from 1966 to 1969 for “Approches”, a literary journal which assumed major significance, and from 1967–71 for “Robho”. In 1976 he founded the Doc(k)s anthology series, which has now reached its 53rd issue (volume 15). Doc(k)s provides an arena for any form of poetry that can appear in a book format. Blaine turns his attention to all parts of the world. Individual issues of Doc(k)s is often devoted to the experimental poetry of a given ethnicity or country. For example, separate volumes have been published about Latin America, Japan, Yugoslavia, Catalan poetry, Poland, Corsica, the Eastern European countries, the USA, China and Spain. Every single issue carries a huge amount of information on the various events going on in the world of poetry, such as poetry recital evenings, debates and various performance art events… Another interesting series published by Blaine is “Unfinitude” (editor: Angeline Neveu), which is exclusively produced by photocopying. These publications seek to explore the artistic possibilities inherent in xeroxing technology. Half a dozen booklets have been published in this series so far, each having been the work of an individual artist. The booklets clearly reflect how the Xerox machine has transformed into a tool of artistic expression: each xeroxed print is different depending on the quality of the ink and the brightness. There are further opportunities in rotating “templates” or superimposing xeroxed layers, etc.

During our arttour we wanted to meet Blaine and Ventabren was virtually on our way to Nice anyway. We actually ran into him sooner than this, at the Polyphonix festival in Paris, which was on exactly when we arrived. Polyphonix, a festival of international sound poetry, had been organised for the fourth time by Jean-Jacques Lebel. Julien Blaine was also member of the four-member organising committee.

Famous representatives of “sound poetry” have taken part in the various Polyphonix festivals such as Allen Ginsberg, Brion Gysin, François Dufrêne, Arrigo Lora Totino (noted performer of futurist poems), John Giorno, Bernard Heidsieck, etc. Unfortunately, we only arrived on the last day, so we missed the best programmes, but this was compensated for since we were able to meet a lot of “mail acquaintances” and we also made new friendships. 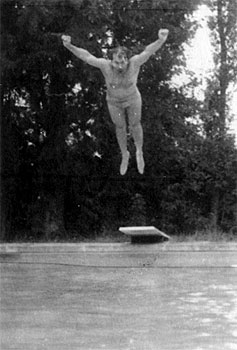 We arrived at the mill in Ventabren in the early afternoon of 7 July, in stifling heat and to the intense chirping of crickets… Julien had had to leave unexpectedly and only came back in the evening, but we were greeted cheerfully by his wife and three children. After the last few hectic days and so much driving we were able to spend the afternoon nicely sunbathing around the family’s little swimming pool feasting on green figs. The afternoon TV programme, which the children enthusiastically invited us to watch, was nothing other that a full-hour programme about Hungary on the occasion of Mitterand’s visit there. The beautifully colourful programme was simply amazing.

On the 10th Julien Blaine and the Doc(k)ers were preparing to open an exhibition to last until early August, and an open Rank Xerox workshop calling on participants to find creative uses for the photocopier. These two events formed part of the “Poetic Encounters” series related to the Avignon Festival. On the evening of the 8th we went to Tarrascon, a few kilometres from Avignon, where the other organizers of the exhibition were meeting Blaine. We already knew Charles Dreyfus and Jacques Donguy from Paris. The highlight of the day was that everybody in our company stayed at a castle in Terrascon owned by Blaine's family.

The next afternoon we continued our journey. Blaine gave Artpool a full series of all the Doc(k)s, Zerroscopíz and Unfinitude issues published up to then, saying that there would never again be another occasion when we would be able to save so much on postage. With yet another box of books we set off towards the Cote d’Azur.